It is a seldom mentioned fact that admissions to residential schools were constrained by a very practical consideration – there were only a limited number of beds available. Residential schools could never at any time have accommodated the entire population of status Indian children.

Moreover there was always competition for the available spaces, and at least some of the demand, as Deputy Superintendent General of Indian Affairs Duncan Campbell Scott advised a Parliamentary Committee in 1920, was attributable to difficult economic conditions which encouraged Indian parents to place their children in residential schools where they would be fed and clothed at the federal government’s expense:

The pressure that came on our Indian schools when the war broke out and the High Cost of Living became general, was very great because the Indian would unload his children on us, for the reason that it immediately became evident to him that it would cost him more to support the child at that period than before the war so that it was purely a matter of self interest. Before that he did not think of it at all. After that he began to think “Well I had better put my children in the schools”.

In fact so many Indian parents applied to have their children admitted to residential schools that some schools had waiting lists. In 1920, according to Scott, there was a waiting list of over sixty pupils trying to get into the Mohawk Institute at Brantford.

As a result of the limited number of spaces available, during most of the two decades between 1900 and 1920 the percentage of status Indian children attending residential schools was closer to one-quarter than one-third. In 1912, for example, according to Department of Indian Affairs census and enrolment data, there were 15,950 school-age status Indian children in Canada, but only 3904 of them, or 24.48%, were enrolled in residential schools.1 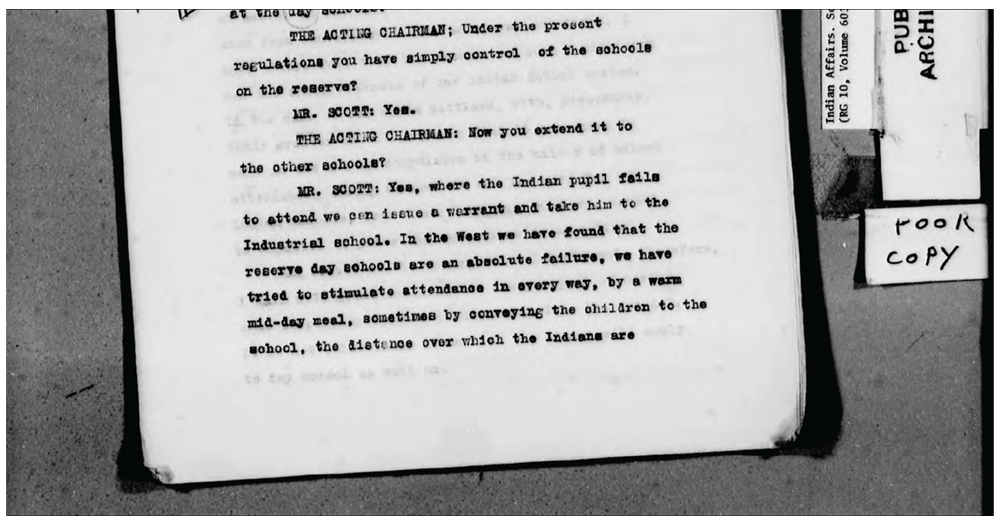 By 1920, although enrolment in day schools on reserves remained in the 50% range, actual attendance was still so sporadic that it was acknowledged by everyone, including Duncan Campbell Scott, that “in the West” the reserve day schools were “an absolute failure“. Federal government officials begun to seriously question the educational and economic rationales for keeping day schools open on Indian reserves when parents sent their children to school only half the time.

Thus in 1920 amendments to the Indian Act made attendance at a residential school compulsory for status Indian children,5 but only if there was no day school on their reserve to which their parents could send them. Applications for admission signed by a parent or guardian were still mandated as part of the admission process, and each application had to be formally approved by the Department of Indian Affairs in Ottawa. Hundreds of such applications signed by parents and guardians still survive in the Library and Archives Canada School Files Series

Under the new system, the demand for places in some residential schools still continued to exceed the supply. In 1925, for example, Father James McGuire wrote of parents “clamouring” for their children’s admission to the Kamloops Indian Residential School.

The demand for spaces was also exacerbated by the federal government’s child welfare policy of admitting to residential schools orphaned, destitute and neglected children. 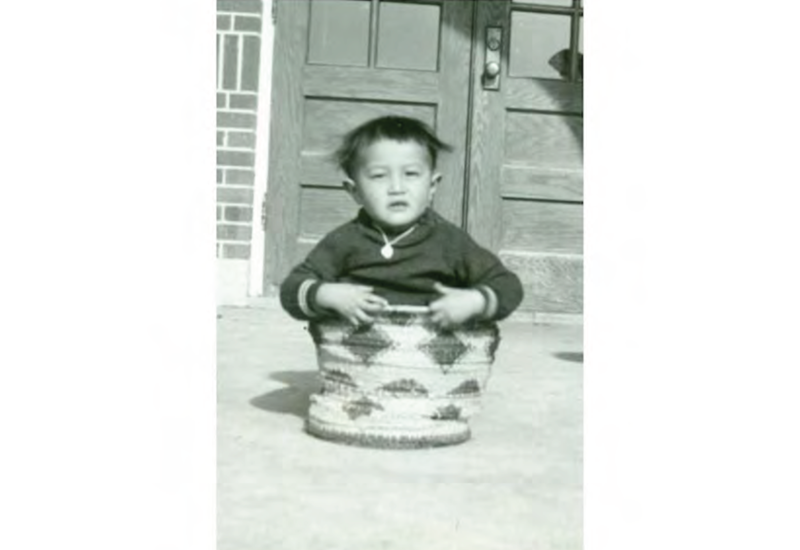 Thus, residential schools were largely filled to capacity during most of the 1920s, and there was no need for the Department of Indian Affairs to enforce the compulsory attendance provisions of the Indian Act. In fact for many years the federal government was averse to enforcement for obvious practical reasons. It was not until 1927 that Duncan Campbell Scott issued a directive authorizing the RCMP to act as truant officers, largely because parents were still not sending their children to day schools on the reserves and the children were being denied an opportunity to get an education.

By 1950, 13,986 children, almost half (47.95%) the total population of 29,167 school-age status Indian children, were attending Indian day schools on their home reserves and, as noted above, average daily attendance had improved significantly.9

Enrolment continued to climb slightly over the next five years, reaching a peak in 1934 when 8596 of the 23,573 school-age status Indian children, or 36.47%, were enrolled in residential schools.12 For the remainder of the 1930s, the figure remained in the one-third range.

In 1948, after a thorough policy review, the federal government made the decision to gradually close down residential schools and integrate status Indian children into the provincial public school systems.14

Non-attendance at any school 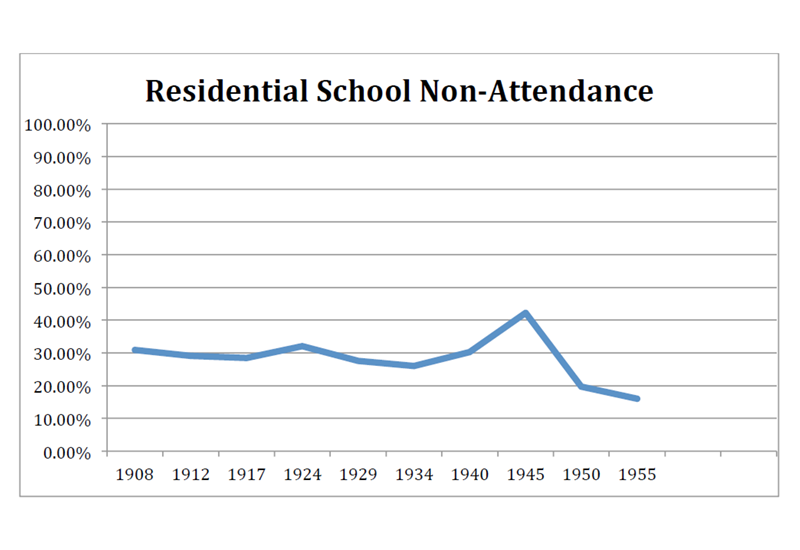 What of the large number of status Indian children who did not attend school at all, or who attended for only one or two years?

2 The provision did not apply to Métis or Inuit children; the Indian Act applied only to status Indians.