A number of staff and student reunions have been held at former Indian Residential Schools across Canada.  Documents from two of them are featured on this page.

The National Centre for Truth and Reconciliation Archives recently posted on its website records of the 2-day staff and student reunion at the former Kamloops Indian Residential School school in 1977 – a signed guest book, a souvenir publication, and a clipping from the Merritt Herald. 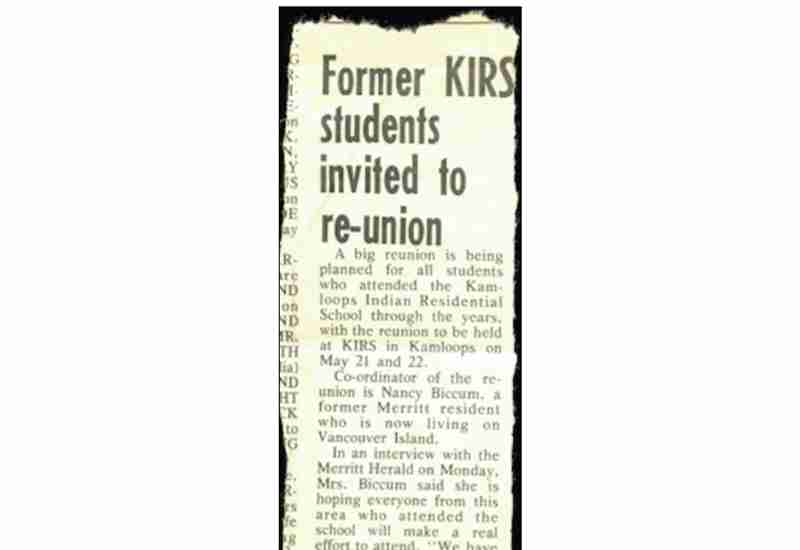 Over 280 former students and staff attended the reunion from towns and cities all over BC – Merritt, North Vancouver, Lillooet, Nanaimo, Mount Currie, Shalalth, Victoria, Spences Bridge, Chase, and many other communities.  Among them were Canada’s first status Indian Member of Parliament and former Kamloops Indian Residential School student, the Honourable Len Marchand; the Reverend Adam Exner, Bishop of Kamloops; Kamloops physician Dr Ivan Smillie; Chief Victor Adolph of the Fountain Band and Chief Harvey McLeod of the Upper Nicola Band.

According to the Merritt Herald, the reunion, co-ordinated by Nancy Biccum, was held at the school on the weekend of May 21st  and 22nd.  Events included Indian dancing with Ernie Philip; slides of the ‘good old school days’ presented by Father Noonan ‘where many of the students will recognize themselves’; more slides presented by former Indigenous teacher Benny Paul; ‘Bone Games’ and a salmon barbeque and dance. 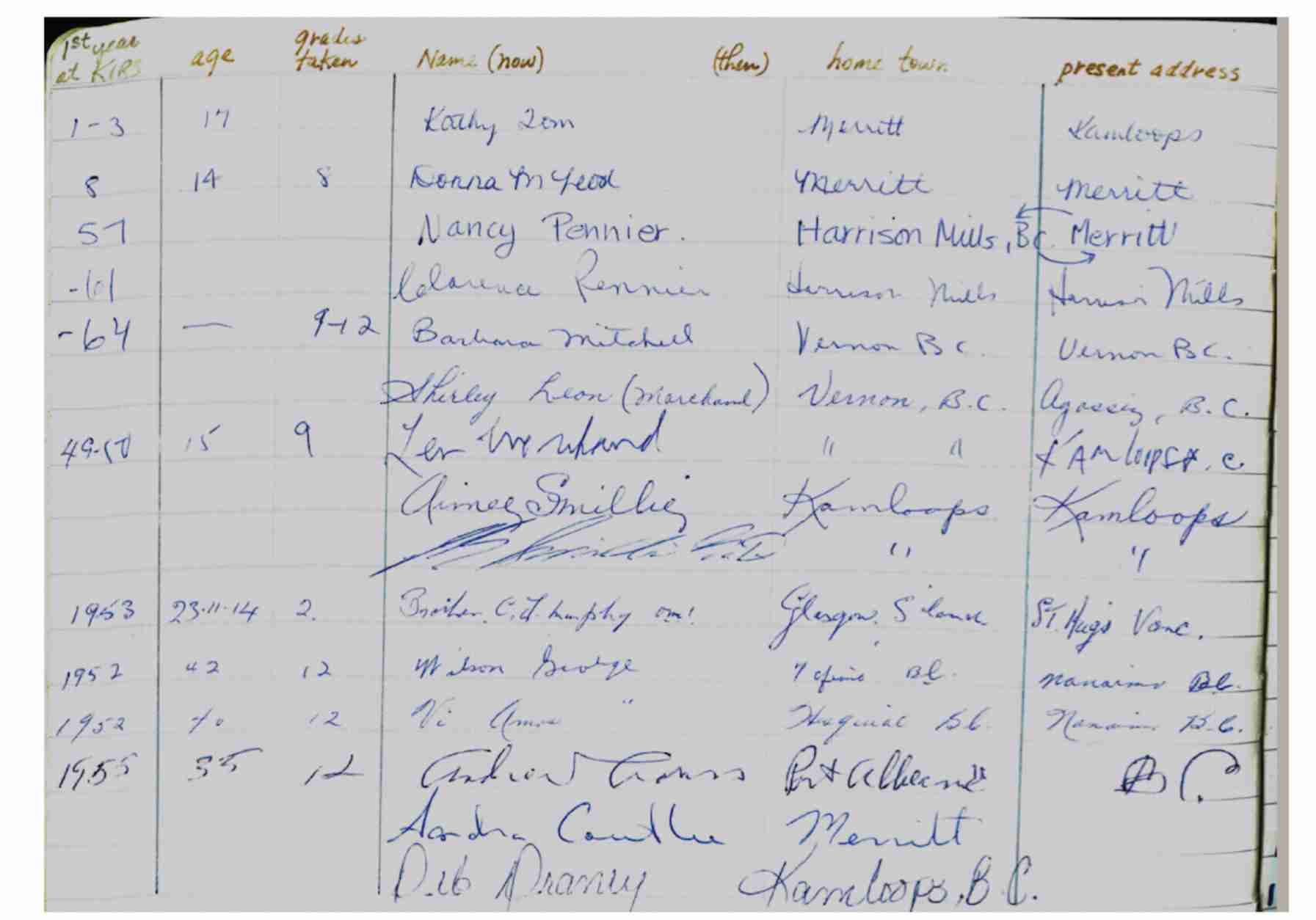 The guest book, filled with more than 280 signatures, was organized by Robert Sterling, who prefaced it with this inscription:

This simple booklet will contain the names of people who chose to come together out of sentiment to meet with each other, to reminisce, and perhaps to mark the near-end of an institution which represented a significant historical era in the lives of Native Indian People . . . .

A souvenir booklet with additional student photos, information about the early history of the Kamloops Indian Residential School, and reminiscences by Father Dunlop and Anthony Liah, was prepared for The Indian Voice by Julie Eaton, Georgia Beale, Nancy Biccum and Donna Doss.

There was a second Elkhorn reunion in 1995.

A souvenir publication, The Spirit Lives On, edited by former staff member Harry Baxter Miller, went through three editions.  Among its contents are a history of the school; some personal recollections; photographs of staff and students; and records of student activities including choir, square dancing, cadets, skating, hockey, boxing, ball games, handicrafts, social evenings and dances.

The Reunion Committee erected a commemorative plaque in 1990:

From these halls of learning there graduated many pupils of Indian ancestry: some who were to serve their country with honour and distinction in wars throughout the world and others who became clergy, teachers, nurses, lawyers, leaders, chiefs and councillors and strong community and family builders both on their home reserves and throughout Canada. 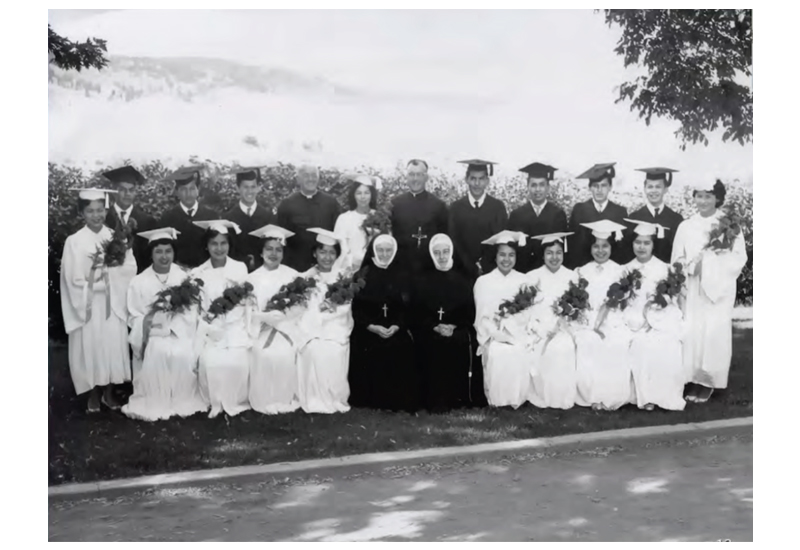 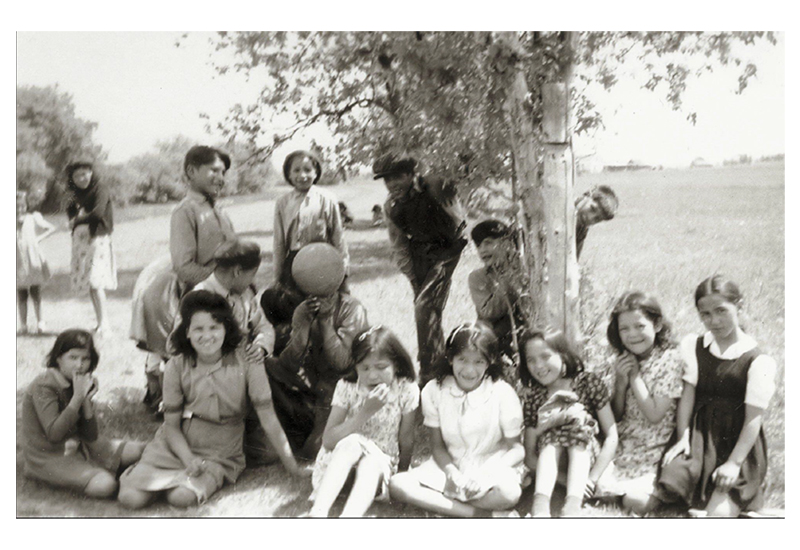 The Spirit Lives On